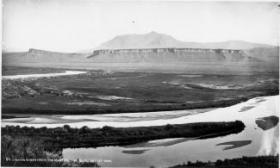 As fast as settlers arrived in the county, conflicts arose over water use.  George T. Bell, an early rancher on the Blue River in the 1890's, had water rights coming out of Deep Creek, Spring Creek, and Soda and Iron Springs.  Daughter Maud Bell had married James Mugrage and when her father died in 1925, she and James stayed on the ranch of about 800 acres, to operate it.  She reported years later that when Noonen, a large rancher also on the Blue, built his ditch, he took much of the Bell water and used it for his own benefit.  Many years later, Maud discovered that although her father was long dead, those early water rights still belonged to the Bells, not the Noonens.

Another family, that of George Henricks, settled far up the Troublesome Valley, about 1900, in what was truly an inaccessible spot.  What possessed him to pick such a remote area for his ranch?  Because when he and his wife Aurille lived in Nebraska and tried to make a living on their farm, farmers upstream stole their water to the point that they couldn't keep their crops alive.  Aurille actually had to use the same batch of water for two or three purposes!  As water fights escalated, George vowed to find a place where nobody could be above him and his water source. Rancher Will Call took him far up the Troublesome valley to a large meadow, reachable only by foot or horseback.  Life wasn't easy, for George and Aurille had to do everything from scratch, and they lived in a cabin with a dirt floor for many years.  But nobody took his water!

Even more recently there was a case on Crooked Creek, where a ranching family that owned quite a good spring and used it to water their hay, discovered that a new neighbor was diverting the water from the spring over onto his own land, to water his own hay!  The rancher protested and diverted the water back where it belonged.  The newcomer turned around and stole it again.  This situation went on for many years without good satisfaction.

The Kirtz Ditch development on the Troublesome began about 1890.  In 1911, an Elias T. Copelin homesteaded land, later adjacent to the Alexander and George Murray Baker ranches.  One day Copelin and Murray Baker, one of the brothers, got into an argument over water rights in the Kirtz Ditch, each accusing the other of stealing his water.  Murray, who was a little guy with a fierce temper, picked up a shovel and gave Copelin a mighty whack with it.  Copelin fell to the ground but after a bit picked himself up, climbed on his horse, and headed toward his home.  However, the blow must have damaged his brain because he was found the next day, dead on the ground at his own gate

High on Meadow Creek, in the early 1900's, lumber activity began in the area later known as Sawmill Meadow.  About 1910, the Western Land and Flume Co. put in a little dam near what is now the trailhead to Columbine Lake.  The resulting lake, today filled with water lilies, was used as a holding pond for logs that would be moved by flume to the main mill downstream in Tabernash.  This lumber company sold to Western Box & Lumber Company in 1912.  Business flourished.  There was even a short railroad going into the woods, with the tracks made of logs about 6" to 8" in diameter.  Prospects looked good.  However, from the beginning water rights were an issue. Some people say it was Nathan Hurd who broke the company.  Western Box had lost some of its water to the Strawberry Ditch (going to Granby) in 1914.  More trouble was looming.  Hurd wanted to keep the water from the little reservoir for the ranchers and lettuce farmers below.  The timber folks wanted to use the water during the summer months to keep the flume going.  Nobody was willing to give up anything, so in 1915, the big mill closed.   Still, efforts continued.

Then in 1919, the planing mill at Tabernash burned.  In the early twenties, further contention led to the withholding of more water from the lumber companies who wanted permission to ditch Trail Creek water across into Meadow Creek, replacing water taken higher up for the flume and Strawberry Ditch.  This would have been quite easy because, about seven miles out of Tabernash is a nearly flat saddle that exists between the two creeks.   Nevertheless the Hurds wouldn't hear of it.

Then one Henry Jarvis showed up on the scene.  He was known to all the timber men.  In 1923, Jarvis, using a box of TNT, "blew the dam" of the irrigation reservoir at Western Box.  People suspected that he did it for T.S. Huston, one of the big lumber powers of the area.  The feeling was that "if the lumbermen couldn't have the water, neither could the ranchers and the Granby farmers."  In any case, that basically was the end of Western Box Company.