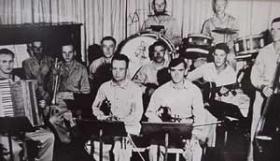 German Prisoner of War camps existed in Fraser and Kremmling during the wartime years of 1945-1946  The Fraser camp provided much needed labor for lumber production while the Kremmling camp shipped cut ice by rail, mostly to the Grand Junction area.

In Fraser, some 200 prisoners loaded an average of 25,000 feet of lumber on rail cars every day. They were quick learners; doing all phases of the work, from horseshoeing to bookkeeping. For their hard work, they were paid 75 cents a day, which they could spend at their Post Exchange.  The prisoners in the Fraser area were were sometimes rewarded with trips to the local movie theater.  They were also allowed to form a dance band utilizing homemade instruments and were permitted to bake special German pastries.

Examples of the beautiful inlay woodworking skills of the prisoners are on display at the Grand County Museum in Hot Sulphur Springs.