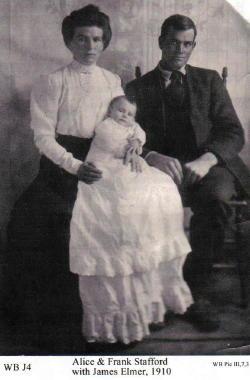 James "Jimmy" M. Stafford was born in 1849 in Wexford Ireland. Jimmy immigrated to Leadville in the 1870's to work in the booming silver mines. In Leadville, he met and married  Deborah Helen Acey (born 1846 in Trenton New Jersey) in 1880.  In the 1880's the couple moved to Dillon and then homesteaded the Stafford Ranch on the Blue River at Spring Creek Road. Jimmy built their home by hand carrying logs from Green Mountain.  They had one son, Frank Elmer Stafford, born in 1886. Jimmy and Deborah also operated the stage stop, boarding house and saloon called the "Halfway House" between Kremmling and Dillon on Highway 9.  It remained in operation until the stage lines ceased in the early 1900's and the buildings were dismantled in the 1940's.

Frank went on to marry Alice Smith in 1909 and they had six children, including their first, a son, James Elmer, who died at age 8 in the worldwide flu epidemic of 1918. Frank and Alice built the Stafford General Store, directly across from the "Halfway House".  Frank was instrumental in installing the first telephone lines in the area and served as Grand County Commissioner from 1928 to 1936 and as County Commissioner from 1948 until his death from injuries in a car wreck in 1950.  Alice was called the "Blue River Belle" and kept the general store until 1960.  Alice lived in Kremmling until her death in 1969.