The Train Comes to Fraser 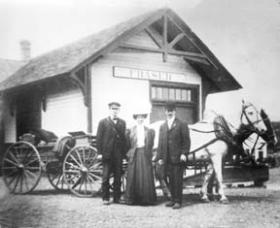 A little over a hundred years ago the few residents of Fraser were awakened by a sound new to their town.  The railroad had finally arrived in 1904, just over 30 years after it had first debuted in .  That same blaring horn, followed by the rumble of iron wheels on rails is waking up the good town-folk of the today.  As the local Manifest has documented recently, many residents have long been annoyed by the noisy disruption the train makes as it announces its passing through town.  Additionally, parents of school children rushing to in the morning can attest to the intrusive obstacle the slow moving behemoth becomes at 7:20 in the morning.

A hundred years ago, residents of the complained loudly of the intrusion of the iron horse on the tranquil lifestyle.  It has long been rumored that the course of the railroad was determined by an angry old timer by the name of Billy Cozens.  Cozens was a pioneer of the valley having homesteaded his ranch in the area in the early 1870s.  According to legend, when the engineers were surveying the route of the future , Northwestern, and Pacific Railroad through the valley, Billy Cozens bullied the crewmen into the woods.  As the railmen would lay their flags for the roadbed, Cozens, an expert marksman, would shoot the markers out of the ground.  As the story goes, this was the reason the tracks were laid through the forest, rather than the meadow.

The reality of the chosen route for the D.N.&P. was due to grade and not fear of the rifle.  Whether Cozens despised the railroad is anyone's guess.  According to Robert Black's book, Island in the Rockies, the railroads designing engineers actually consulted Cozens concerning the lack of snow on the continental divide.  Regardless, the rumors have persisted over the years about the "Old Sheriff's" contempt for the railroad.  It has even divulged to me that the ghost of Billy Cozens will not allow anything concerning the railroad in his former home, the .  Whenever railroad exhibits have been attempted they have mysteriously vanished and were never seen again.

As far as the townfolk of Fraser were concerned, many of them regarded the railroad as an opportunity that had eluded the region for years.  Unfortunately for Fraserites, their town was to be bypassed as the major hub for the area.  Further down the valley Tabernash was chosen as the location for the workshops and roundhouse for the forthcoming trains.  As a result, the trains would move through Fraser without their engineers paying the town much notice outside of their blowing whistles.  Nonetheless, the people of the valley would embrace the iron horse.  Economic potential in would erupt due to the advent of relatively efficient transportation.  Specifically, the lumber industry would boom with the outlet that the railroad would provide.  Additionally, people could move between and easily compared to the wagon roads that formerly provided the only passage to the outside world.  As timber and cattle traveled to the , mail and hard goods traveled back to the .

In years past, just like today, it has been easy to forget the benefits that the railroad has brought to our lives.  Certainly, when the train moved into the valley, the people that day realized that their life could slow down a bit.  The reality was that the short inconvenience that the passing train brought with its blaring horn, bringing traffic to a momentary standstill enhanced the life and character of the .  It provided power, people, and materials in a unique way that simplified life here.  This is as true today as it was in 1905.
Category:
Railroads