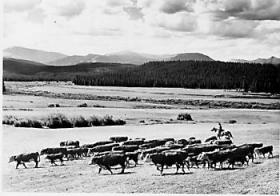 According to local lore, Native Americans named Devil's Thumb, a rocky outcropping that towers high above the Ranch. As legend goes, after the warring Ute and Arapahoe tribes settled their differences in the , they buried the devil, but left his thumb exposed to remind them of the evils of war.

Before the Trans-Continental Railroad opened up the area in 1904, a stagecoach route from Idlewild (now ) joined the route. A state station was situated east of what is now our Ranch. The road extended transversely over the Ranch where it followed the course of the existing County Road 83. The land was rich agriculturally, and was used for cattle grazing in the early 1900s.

After the railroad was introduced, settlers began moving west in search of wealth and opportunity. Many ended their journeys in the . During this time, there were more people living in the than there are today. One favorite hangout of the railroad workers was a dance hall on Black Ranch, located immediately north of Devil's Thumb Ranch.

In the 1930s, Margaret Radcliff built the original Ranch homestead and operated it as a dairy. However, it was brothers Dan, Louis, and George Yager who started Devil's Thumb Ranch as a vacation property in 1946. The Yagers incorporated the Radcliff homestead in to the Ranch facilities and the original building exists today as the Ranch House Saloon.

The Yagers operated Devil's Thumb Ranch as both a working ranch and dude ranch until 1972. They introduced cross-country skiing in the winter of 1975-1976. Dick Taylor, a 1964 Olympic cross-country team member, designed 35 kilometers of the area's Nordic trails.

The Ranch was well known as a Nordic destination, but one without many amenities or niceties. The current owners purchased it in 2001, saving it from a group of developers who planned to fill the valley with residences and a golf course. They immediately began making improvements to the facilities, all the while impacting the land as little as possible.