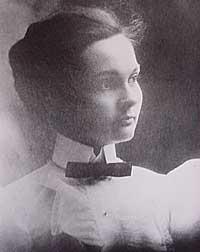 Susan Anderson was born on January 31, 1870, in Nevada Mills, Indiana. Her parents, William and Mary Anderson, were divorced in 1875. Four-year old Susan never forgot her parents arguing and her mother crying before her father literally grabbed Susan and her brother John, who was three years old, from their mother at a railroad depot. He jumped on the train as it was leaving the station and took them to Wichita, Kansas, where he homesteaded with Susan’s grandparents.

Susan’s father, Pa Anderson, had always wanted to be a doctor, and he vowed that one of his children would fulfill that role, which he had been unable to accomplish. John, however, was more interested in roping cattle and playing than becoming a doctor. Contrary to John, Susie watched her father, a self-taught veterinarian, as he worked on animals. She absorbed important knowledge for her future as a physician. Susie was less interested in the lessons that her grandmother taught her: manners, housework, crocheting and cooking.

Shortly after Susan and John graduated from High School in 1891, Pa Anderson remarried and became very domineering, insisting that everything be exactly as he demanded. At about the same time, the gold strike in Cripple Creek, Colorado, caught William Anderson’s attention, causing him to sell his homestead in Wichita and move the entire family to Anaconda, CO, which was about one mile south of Cripple Creek. Very rare for the time, Susan pursued an education in medicine and graduated from the University of Michigan and started practicing in the mining towns of the area.

In her 30's Susan contracted tubuculosis and came to the Fraser Valley in hopes of a cure in the clear mountain air.  Not only did she regain her health, but she he practiced medicine from 1909 to 1956 in Grand County, a total of forty-seven years.

People in the area were very poor and seldom paid in cash. They usually gave her meals for payment. This suited her fine because she did not like to cook or keep house, which was always messy. Because the railroad ran beside her shack, she often would be called to various parts of the county, even at night. Doc. Susie would flag down a train and ride wher ever she needed to go, free of charge. She also treated the men working on the railroad and their families in Fraser and Tabernash, which was about three miles northwest of Fraser. Around 1926 Susan became the Coroner for Grand County.

One time she hiked eight miles on snowshoes to a ranch because she was con cerned about a woman who was due to deliver her baby soon. That night the mother gave birth to a baby girl. While there, the four-year-old son had an appendicitis at- tack. Neither of the parents could take the boy to Denver for surgery. Doc Susie took him by train. A blizzard hit, blocking Corona Pass. The men passengers were called out to help clear the track It wasn't until the next morning the train arrived in Denver Doc Susie had no money for a taxi fare. The passengers gave her the taxi fare to get from the depot to Colorado General Hospital. Doc Susie stayed with the boy during the surgery from which he fully recovered.

Another time Doc Susie rented a horse drawn sleigh to go as far as she could, then snow shoed into a ranch in a storm to treat a child with pneumonia. She had the rancher heat his home as warm as he could, heat water and then put the child in a tub of steaming hot water and open the door to make more steam. By morning the child had recovered.   SDoc Susie lived to be ninety years old. The last two years of her life she was cared for in a rest home by the doctors for the Colorado General Hospital out of respect and love.

Susie wanted to be buried beside her brother in Cripple Creek, but because of bad record keeping, no one could find his grave until later. She was buried in a new section of the cemetery. When the residents of Grand County learned there was no head stone, they took up a collection and erected a headstone.

Susan Anderson never married, but she said she had delivered more children than any one and claimed them as her children. Her family was everyone in Grand County. Her home still stands in Fraser and the Cozens Ranch Museum has a display of her life and medical tools.