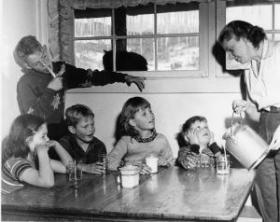 In its earliest days of settlement, Middle Park area residents and travelers doctored themselves using whatever remedies they were able to concoct on the scene of accident, illness, or injury.  The cure might have been a poultice of herbs, bread, oil, mustard, or something called Raleigh’s Ointment.  It might have been a dip in the medicinal springs at Hot Sulphur, a dose of iodine, arnica or vinegar, castor oil, Epsom salts, or any number of other standbys.

The first “doctors” known in the area were Dr. Hilery Harris (1874 or 1876) and Dr. David Bock (1876); both were “self-certified”.  Dr. Harris had a predilection for the treatment of animals, while Dr. Bock treated the medical and dental needs of the people. By the mid-1880s, there were a number of doctors traveling through the area, working for various entities and setting up private practices.  During the mining boom, there were a number of physicians and surgeons in Teller City, which was then a part of Grand County.

Around 1900, the Dunphy and Nelson Contracting Co, a construction firm building roadbeds through the Fraser Canyon for the Moffat Railroad employed Dr. John Wills as company physician.  By 1903, the Denver, Northwestern and Pacific Railroad employed Dr. Leonidas Wills, cousin to John Wills, for its employees and families.  These types of company jobs provided regular work as well as regular pay for doctors who otherwise would have had little in the way of compensation for their work.

Many of the doctors found themselves moving from community to community as the working community moved--from the Fraser Canyon to the Gore Canyon to lay roadbed, or from one logging area to another.  Later, work flow was based on government projects such as the construction of the Moffat Tunnel and the Alva B. Adams Tunnel, both of which went back to the old tradition of having a company doctor.  By the time of the coming of the Moffat Line to Grand County, most of the communities had drug stores, many of which were owned solely, or in part, by the local physicians. There, people could avail themselves of all types of patent medicines, drugs, toilet articles, soaps, perfumes, and sometimes even a drink at a soda fountain.

It was common for surgery to be done in the home of the patient, or the doctor.  Only occasionally, for the worst of illnesses or injuries, did the doctors attempt to transport patients over the Continental Divide to a Denver hospital.  Childbirth was almost always in the mother’s home, under the watchful eye of a female neighbor, or a midwife, and  rarely with a doctor in attendance.

Dr. Archie Sudan built a medical facility in Kremmling and Dr. Susan Anderson remodeled a barn in Fraser to accommodate her patients. Often it was the wife of the doctor, who might be a nurse, who attended the patients.  Many of those in attendance were trained by the doctor in charge; some went on to attain certifications as Registered Nurses or other professionals.

In June, 1947, the Middle Park Hospital Association held a fundraiser to undertake hospital improvement.  The first $20,000 raised went to buy the home/hospital of Dr. Archer Sudan.  In total, the group raised between $35,000 and $70,000 to purchase, remodel, and outfit the facility, which was intended to serve all of Grand County, most of Summit County, and parts of Eagle, Routt, and Jackson counties. The hospital had four private rooms, three wards for six patients each, living quarters for hospital personnel, an office, exam room, operating room and an x-ray room.  Dr. Ernest Ceriani was the first physician for the new facility.

The local rural physicians often called on their colleagues in the city for assistance with difficult cases.  They arranged for specialists to visit, consult and perform surgery, saving the patients and their families hospitalization in Denver.  Just as today, the need for specialized care presented special difficulties for the rural physician of the early days.