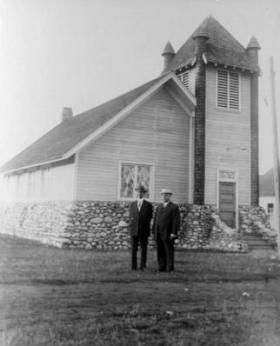 The first known white settlers came to Grand County about 1874 but there were no established churches for many years. The area even lacked circuit riders and camp meetings so typical of many other parts of the West.

The first building used exclusively for a church was probably an Episcopal church in Grand Lake, erected in 1896, but used sporadically during summers only. An Arapahoe Indian who was an Episcopal priest held occasional services in that town.

The First Congregational Church of Hot Sulphur Springs was dedicated in 1904 and other churches were also established about the same time in Kremmling and Fraser.

Sunday School activities along with special holiday services and women’s activities seemed to be what provided continuity to worship efforts. Curiously, at one time a local newspaper carried weekly Sunday School lessons.

A Greek Orthodox church was built in Hot Sulphur Springs for the many of that faith who visit there. A major growth spurt developed during the last quarter of the 1900’s when older buildings became overcrowded and residents, long-term and recent, decided to commit time and money to new church buildings. In 2004, 28 churches were listed in the telephone directory.