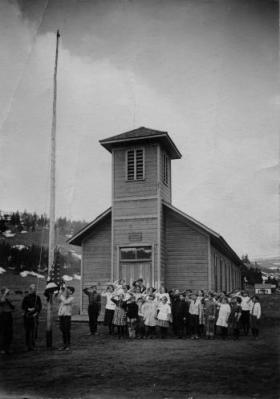 The first official school in Grand County was founded in 1875 in Hot Sulphur Springs in a crude dugout. The school met for twenty days and a painting of the classroom shows nine students in attendance. Typically the woman teachers of that era would have earned about $25 per month.

One report to the Colorado State Department of Education said, “The school secretary left during the Indian uprising and no school records are available.” This school was presumed to be at Hot Sulphur Springs.

In the 1890s school was not held every year in Grand Lake because not enough taxes were raised to pay for a teacher. The school year was generally April through October and classes were held in various vacant buildings for many years. The first schoolhouse in Grand Lake was built in 1910 and remained a one-teacher school until 1935.

A notice published in the Middle Park Times on january 31, 1889 annouce that a masquerade ball and supper of "beef steer and chickens" would be held on February 14th to raise money to build a school.

In 1898, the offerings were expanded to include the first experimental high school curriculum to be offered in the county. As towns were developed, several rural one-room schools also came into existence. Many schools were taught only during the summer because winter travel was too difficult.

At one time there were nineteen school districts. In 1958 the County was reorganized into two school districts, with the result that today there are two high schools, two middle schools, four elementary schools, one charter school, one alternative school, and one private Christian school in Grand County.