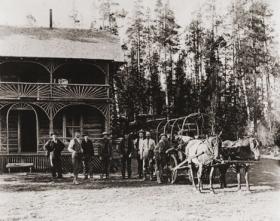 Nestled on a quiet lane in Old Grand Lake City sits the intricately crafted home of Warren C. and Mary O’Brien Gregg, known today as the Spider House – a testament to a remarkable woodcraftsman and his tormented wife.

Warren (Watt to his friends) was a dreamer and in the 1870s he left his first wife and a young son in Wisconsin and headed for the Colorado Territory seeking his fortune in the mines of Gilpin County.  Upon returning to Wisconsin his first wife died of fever, leaving Warren a widower with a small son.  Holding tight to his dreams of the west, Warren eventually ended up in his native Indiana where he met and married 20 year-old Mary O’Brien, in 1884.   By 1888 Warren packed his new family into a prairie schooner and headed west.  Like so many other pioneer women before her, Mary bore a child along the trail, a second son whose short life would send Mary down a dark and tortured path.

The family arrived in Middle Park late in the summer of 1888, built a small homestead on the eastern slope of the Stillwater drainage and the newborn died shortly thereafter.  Though the years would bring more children, Mary would never quite recover from the loss of her second son. They continued to scratch out a living in this harsh and isolated land, where winters were long and supplies were meager.

Warren spent much of his time searching for game and exploring this new country. The Gregg’s moved numerous times, finally purchasing a plot of land from Old Judge Wescott on the west side of the lake.  Warren built his family an admirable house, with intricate detail and spider-like webs of wooden elements.  Despite the warmth and comfort of this new home, and the close proximity of neighbors, Mary’s depression deepened.

Then on a sunny Sunday in 1904, while Warren was working in his woodshop and oldest son Lloyd was having Sunday dinner at Judge Westcott’s, Mary took a gun to her four remaining children and then turned the weapon on herself.  The children died instantly while Mary lingered on for four days.  The five victims of this tragedy, one girl, three boys and Mary herself are buried together in one grave in the Grand Lake Cemetery.

Warren lived in the Spider House for another 29 years. With his son Lloyd, he continued building homes and stone fireplaces.  He succumbed to heart failure in 1933.  Mary O’Brien Gregg finally found peace in the quiet grace of the little town cemetery surrounded by her children.  Almost a century later, as the tall pines whisper their mournful winter song, the Spider House still sits nestled on that quiet little lane.