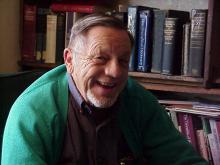 History and Philosophy Professor Abbott Eastman Fay was born in Scottsbluff, Nebraska on July 19, 1926. He married Joan D. Richardson November 26, 1953 near the beginning of his teaching career. They had three children: Rand, Diana, and Collin. He obtained his BA at Colorado State College (now the University of Northern Colorado) in Greeley, Colorado.

He taught and was a principal in the  Leadville, Colorado Public Schools  from 1952-54, then moved to Mesa College in Grand Junction, where he taught until 1964.

From 1964-1982 he taught at Western State College in Gunnison, Colorado, retiring as Associate Professor Emeritus and has since taught extensively for Western State and other regional colleges as adjunct professor.

His published works are extensive and include Ski Tracks in the Rockies, Famous Coloradans, I Never Knew That About Colorado, More That I Never Knew About Colorado , Beyond the Great Divide, To Think that This Happened In Grand County!, A History of Skiing in Colorado, The Story of Colorado Wines, and many other books and articles.

Abbott Fay died March 12, 2009 after a brief illness. His biographical website is abbottfay.com.