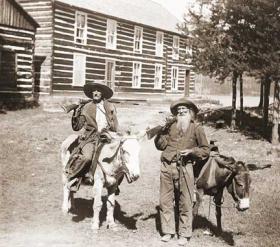 Ghost towns and broken dreams are legacies left by the early miners and prospectors of Grand County. Ever since 1879 when the first mines were staked out and claimed on Bowen Mountain near Grand Lake, “gold and silver fever” grew like an epidemic. Men blinded by greed and prospects of a better tomorrow scrambled to the Kawuneeche Valley with picks and shovels to unearth their fortunes. Women worked just as feverishly along side their men and encampments gave way to mining towns almost overnight. Land offices, eateries, and boarding houses sprouted like wild flowers.

Claim jumping became a common practice, resulting in fights and even murders. Most of these injustices would go unpunished, for no one wanted to risk losing their chance of riches. In Grand County the mother load was a false prophecy, as only small quantities of low grade gold, silver, and lead ore were found. In a few short years, Gaskill, Teller City, and Lulu City, three of the more noted settlements, suffered the same fate as the other boom towns. By 1885 the mining boom had ended in Grand County and ranching had taken it’s place as a sustaining industry.