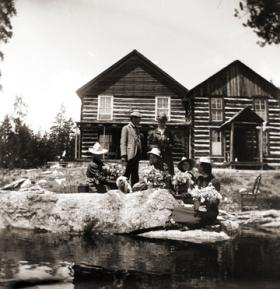 Of all the leisure time activities available to the pioneers, dancing was the favorite. Dances were held in grand hotels that remained from the mining boom, such as the Fairview House and The Garrison House in Grand Lake. Quadrilles, a type of square dance, were popular at the time. A fiddler would provide the music and serve as the caller. These parties would start in the evening and last all night.

The formidable temperatures and great traveling distances were incentive for getting the most out of every gathering. Winter Sports have also always been a popular pastime. Skiing was introduced to the region during the winter of 1883. Snowshoeing and sleigh rides were also enjoyed. 1882 officially brought the arts to the Grand Lake area when the Dramatic Society was organized. A production of the well-known comedy "Our Boys" was the premiere performance.