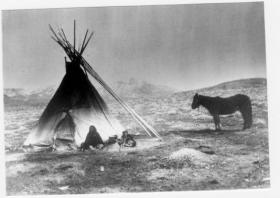 Colorow was a Ute Chieftain who was known for profound stubbornness and bitter resentment of the white man's intrusion into the Ute hunting grounds.

Indian Agent Meeker had ruled that that the Utes must depend on the United States government for food supplies, rather than their traditional hunting. These supplies were sometimes held up for delivery and upon their eventual arrival,contaminated. Colorow thought the white settlers of Middle Park (near Granby) were killing too many of the game animals that had been critical in feeding the Ute people.

So in the fall of 1878, Colorow started a brush fire high in the Medicine Bow range, planning to drive the deer, elk, and buffalo west to the Ute reservation.  But the winds took an unexpected shift, driving the wild game northward and away from Ute territory.

The fire drove out the last of the buffalo ever to be seen in the Middle Park region again and it took many years for the forests and ranges to recover from the devastation.