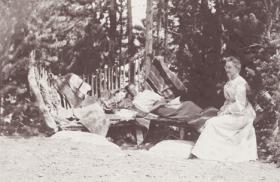 In 1938, decided to establish a library to act as a central reservoir of knowledge for its citizens. The community realized that few people can purchase all of the books and other materials which they may need, and so they agreed to pool their money in the library to build its central collection. At the same time they wanted to be sure that their interests would always be represented in the operations of the library, and so they formed a board of trustees from among themselves.

At about the same time, the federated women's clubs in and , for the same reasons, set up lending libraries in those two communities. Run by the clubs for many years, both were eventually incorporated into the .

In 1994, the Committee to Protect the Library was established to petition the Board of Commissioners to increase funding for the library to set aside a completely separate library fund, which would be administered as a Library District. The voters approved the move on , and Grand County Library District was formed on .

Today, the library still serves that same basic function for the community as well as new roles acquired in the intervening years.