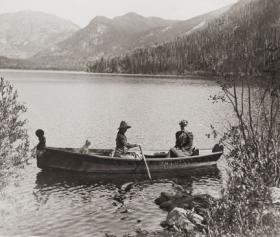 Judge Joseph L. Wescott, an early white settler, wrote a poem about a Ute story he heard from an Indian camping at the lake in 1867.  One summer Utes were camping on the shores of Grand Lake when they were suddenly attacked by an enemy tribe of the Arapahoe.  As the brave Ute warriors began fighting, the squaws and papooses hurried onto a raft for safety, pushing the raft to the middle of the lake. As the battle continued, a treacherous wind overturned the raft and all the women and children drowned.

It is said that you can see ghostly forms in the morning mist rising from the lake and hear the wailing of the women and children beneath the winter ice.