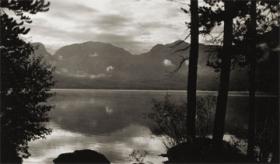 During the summer of 1960, Jeff E. Fuller and Don Drake formed Mountain Services Inc. to offer Grand Lake shore owners protection by patrolling the properties.  In May of 1961, Don Drake promoted the idea of a fireboat and with donations, a 1960 18 foot Buehler Turbocraft Jet 56 was purchased and equipped to fight fires. Don tested the water jet and found that it would pump enough water to reach the fourth story of the five story-14 bedroom Oscar Malo home.

Ironically, on September 10, 1961, that very home caught on fire.  The home was completely engulfed by the time Don got the fireboat to the location but, with the help of Elmer Badger and Jerry Gruber, they concentrated on the 4-slip boathouse.  The heat was so intense it melted the plastic trim on the fireboat but the boathouse was saved and still stands today.