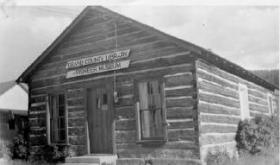 The library remained in the log courthouse until the mid 1970s when it moved into a 19 ft. 9 in. X 8 ft. 6 in. room in the current courthouse. This tiny room had a double-sided bookshelf in the middle, a bookshelf along one wall, a desk and a chair, and a card catalog on top of a small table. There was only a narrow pathway around the center shelving. There was no room to hold story hour for the 10-15 children who came, so story hour was held in the community room upstairs or the county or district courtrooms, the commissioners' room, or once on the stairs in the stairwell between the first and second floors. Much of the year the hallway by the Treasurer's and Assessor's offices was filled with hats, mittens, coats, boots and the noise and chaos of the children enjoying story hour.

Since the jail was also located in the courthouse, the library was used by prisoners. Those who were "trustees" were allowed to visit the library in their neon orange jail suits. One prisoner was permitted to visit the library to paint a delightful mural of a dragon on one wall and a dog on the window in the door. One day a prisoner asked if he could order some Kurt Vonnegut books. The Librarian jumped up so excited that the tiny library had some Vonnegut books, she kneeled and pulled out a Vonnegut book titled Jailbird!!! In 1983 the new jail was built and the Library moved to the old jail area on the second floor. It was a much larger space and had a restroom.

In the late spring of 1990 the Library moved to its present location in the newly-renovated former bunkhouse of the U.S. Forest Service summer personnel. This larger facility brought many windows and space for story hour, and until the year 2000 there was a wonderful yard in back for story hour and summer reading program activities.