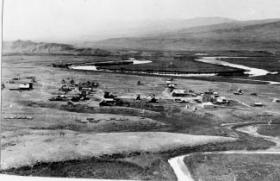 Kremmling started as a general mechandise store, owned by Rudolph (or Kare) Kremmling, on the ranch of Dr. Harris, located on the north bank of the Muddy River. In 1888, John and Aaron Kinsey had part of their ranch platted, calling the site Kinsey City. Kremmling moved his store across the river from the new site and the town that subsequently developed became known as Kremmling. There was a post office established at Kremmling as early as 1885 and the town was incorporated in 1904.

The Middle Park Fair was established here in 1912. Famous Western Novelist Zane Grey spent time in Kremmling and, as a result, wrote "Mysterious Rider" in which the area is shown as a classic Western setting.

During World War II the town was the location of a prisoner of war camp where German prisoners cut ice that was shipped by rail to other locations.

The local ranching industry, the presence of the railroad and its strategic location at the confluence of the Colorado River, the Blue River, and Muddy Creek made Kremmling a natural location for a town, which still retains the “Old West“ atmosphere.