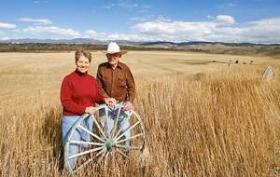 As late as this summer, John Murphy, 94, mowed ditches on his ranch land and built a new fence. "You got to keep busy doing something," he said. His longevity, he said smiling at wife Carolyn across the table, is owed to "having a good wife to keep you healthy."

And then he added, "and being stubborn and contrary, I guess." But, Carolyn believes John's secret to healthy aging is due to "hard physical labor from an early age," plus the privilege of being raised where there is good air, little junk food, fresh vegetables, fresh milk daily and ranch-harvested meat. Dancing and regular rodeo jaunts also don't hurt.

This week, the Murphys are pausing to acknowledge a 100-year milestone, when John's parents first bought the ranch in greater Granby. John Murphy was born in the family's white two-story ranch house, which still stands on the property, six years after his parents Anna (Rohracher) and James Murphy bought 160 acres from Leopold Mueller in 1909. He had purchased the land from the widow of Edward Weber, who was one of the Grand County commissioners shot in the Grand Lake shoot-out of 1883. Weber's grave is still surrounded by a white-picket fence, located just northwest from the Murphys' newer home.

Mother Anna had crossed the ocean from Austria in 1882 with her family, then in the spring of 1884, they walked over Rollins Pass from Ward to homestead at Eight-Mile Creek south of Granby. The town of Granby didn't sprout until the railroad came through in the early 1900s, so twice a year, the family would travel over Berthoud to Georgetown to buy groceries - a testament to the fortitude people had back then. "How often do you go for groceries now?" John asked. "Twice a day?"

Anna and James married in March of 1907 and had three children: Margaret, James and John. When John was just two years old, his father died and his mother was left to care for the ranch and the three young children. She later married Joseph Reinhardt who had the ranch above theirs.

Upon her death in 1952 at the age of 75, "The Middle Park Times" saluted Anna for having been "a hardy pioneer woman" who prided herself for her ability to horseback ride and milk cows, and called the latter a "fine art rather than a chore."

"It was a pleasure for her to sit down and milk cows," John said. "That's when she could rest. She would milk half of the cows while me and my step-dad milked the other half."

The ranch had about 35 cows, and the cream and milk they produced was shipped to Denver where it was sold. When the lettuce colonies came to the Granby area around the early 1920s, the Murphy ranch prospered selling milk and butter to local settlers.  "Where the airport is now, there was a shack or tent on every 10 acres over there," he said, "and five packing warehouses along the railroad." Even a section of Murphy land was leased to grow lettuce and spinach.

When young boys, John and his brother would sometimes find entertainment riding on the backs of calves in the barn - always out of sight from their mother who would have disapproved, he said. And the younger John would horseback to the Granby schoolhouse located across from the present day Granby Community Center.

Back then, Granby was barely a settlement, and the Murphys' closest neighbor was farther than a mile away. Granby, especially, has grown in the past 20 years, threatening the lifestyle he has known all his life. In the past, ranching families made up the community, and neighbors looked out for one another, he said. "There was kind of a togetherness," he said. "Now we don't have that."

Nodding to the golf courses and newer homes surrounding Granby proper, "We're losing it, losing all the ranchers," he said. "Like any piece of property, I hate to see it change hands, but progress happens and there's nothing you can do about it."

John Murphy began running the ranch in 1934 and his older brother James ran another ranch near Fraser, land the brothers originally had purchased together.
John's first wife Edith died during childbirth, and John became a single dad to a daughter and son who were 2 and 4 years old at the time, running the ranch and raising his children like his own mother did when he was a toddler.

At its height, John Murphy's commercial cattle operation had about 2,000 acres and about 120 pair of cows and calves, with the calves selling at the top of the market in Omaha. John said from working his land for hay through the years, he has found buffalo horns. "There must have been quite a few buffalo here in the 1800s," he said. The land has since been leased, split, and some shared with John's family, including daughter Jennifer Baker and son Steve Murphy.

Although the winters are no longer as harsh as he remembers them - "It would get 30 to 40 below for the whole month," he said - he and wife Carolyn now winter in Arizona. John met Carolyn in the 1970s, and the couple would dance at haunts such as the Circle H and Hazel Mosle's (now Johnson's Landing). "I just held the girls, and they did the dancing," John said. "She complained I held her too tight," he said, of Carolyn. "And she's been suffering every since."