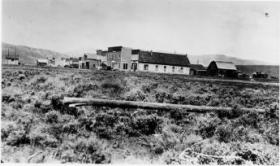 Fred Selak was a descendant of early settlers in Grand County.  He built a cabin three miles south of Grand Lake where he lived alone.  He helped his brothers in various enterprises including mining, a general store and a sawmill.  Selak was known to be a prosperous citizen who lent money to others and there were rumors of hidden cash and gold in his cabin.  He was also known to be an avid coin collector.

When Selak failed to pick up his mail for several weeks, the postmaster visited his cabin July 26, 1926. After not getting a response to his knocks, the postmaster summoned an employee of Selak's with a key.  When they opened the door, they discovered the cabin in shambles and Selak missing.  Sheriff Make Fletcher was notified and a nephew of Selak's called in the Denver Police Department.

As the investigation progressed, a .22 caliber slug was extracted from the wall and blood was found on an easy chair, but further investigation ruled these clues inconsequential as they were dated to many years prior. Sheriff Fletcher conducted a massive manhunt on August 16th and the body of Fred Selak was found on the second day by a deputy's dog.  The body was hanging from a tree and evidence showed that, because of a sloppy knot, Selak did not die quickly of a broken neck but rather suffered a slow strangulation.  The murder had taken place a month earlier and the body had stretched until the feet were touching the ground.

Arthur Osborn, 22, and his cousin Roy Noakes, 21, became prime suspects after showing off old coins and trying to spend them for minor purchases around Grand Lake.  After interrogation by the Denver Police, both confessed to robbing and killing Selak.  Later, Noakes claimed that the confessions were coerced by the police.

The suspects were kept in the Denver jail until their trial on March 7, 1927 and Sheriff Fletcher had to take great precautions against a possible lynching.  The only motive for the murder seems to be based on a land dispute years earlier in which Osborn was arrested for a violating fence line.  Both suspects were found guilty and sentenced to death.  After many appeals, the convicted murderers were hung in Canon City on March 30, 1928.