Water from the Mountains - The Grand Ditch 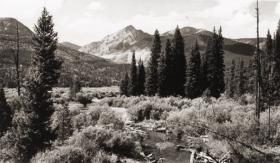 Though few, high altitude water ditches have had a major impact on Grand County's history and economy, there were many early valley ditches transporting this precious commodity from water-right sources to the owner's ranch. However, the threat of transporting great volumes of water from our county to Boulder County via high altitude ditches appeared back in 1889.  Certain interests east of the Divide talked the Legislature into appropriating $25,000, for surveying and developing a 20-mile-long canal over South Boulder Pass to South Boulder Creek.  Amazingly, neither Grand County residents nor very many others opposed this notion.  Luckily the state engineer found the terrain so difficult that not even $2000 was ever spent on the project.

The next effort occurred also in 1889.  This privately financed plan was to develop a two-branched canal system that would move 700 second feet of water to a half-mile tunnel just beneath Berthoud Pass at over 11,000 feet, thence down to Clear Creek and on to the Golden area.  Initial surveys were begun that fall and roads laid out the following year.  The effort bogged down but was resurrected in 1900 under the Agricultural Ditch Co., supplemented in 1902 with the Berthoud Canal Co.  The canal was partially completed by the Frank Church family ranching interests of Jefferson County by 1906.  The ditch, which can be walked today, runs from Second Creek to Berthoud Pass, though it no longer carries much water.  However, the Church Ditch water rights coming from Clear Creek still exist and today are owned by Northglenn.

Proposed in 1890 by the Water Supply and Storage Company of Fort Collins, a greater canal was to be built 1000 feet above the Kawuneeche Valley, that would tap the high tributaries of the North Fork of the Grand River, sending the water over Poudre Pass to a reservoir and then into the Cache La Poudre River and on to agricultural areas east of the Front Range.  The water company, later known as the Grand River Ditch Company, appropriated 525 second feet at the time of the initial diversion in 1892.  (When the Grand River was renamed the Colorado River in 1921, the company was changed to the Grand Valley Irrigation Company.)  The ditch was dug by hand, primarily by Japanese and Mexican laborers.  By 1900, water was flowing eastward.

By 1906, this major canal, known as the Grand Ditch, and draining water from the Never Summer Range, had a capacity of nearly 358 second feet with 12 headgates within 8 miles, running from Baker Creek to the pass at 10,179 feet, plus a smaller canal carrying 183 second feet within 11 miles, coming from Specimen Mountain.  In 1936, using machinery, the ditch was lengthened to 14 miles.  The Grand Ditch is about 20 feet wide and 6 feet deep, though the water is rarely more than 3 feet deep, and this water irrigates some 40,000 acres in Weld and Larimer counties.&gt>

The National Park Service has argued against the allocation of all this water to the canal as it is needed to support plant life and animal habitat.  Becuase river water flow was cut in half, the immediate effect was a reduction in the fish population in the Colorado River.  More recently, a major washout in the ditch caused devastating damage to the slopes below the ditch and to the Colorado River itself.  Hikers climbing up from the valley use the Grand Ditch as a route to the high peaks and lake.  But as viewed from below, the Grand Ditch is often considered an ugly scar on the landscape.