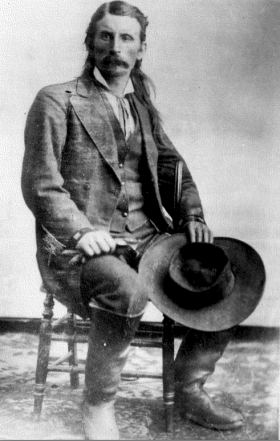 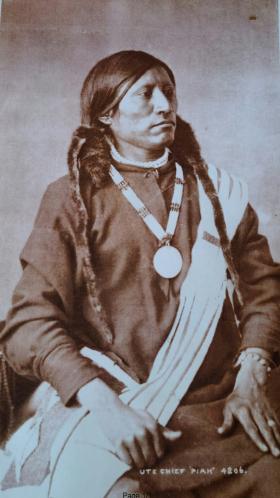 William Jefferson (Wm./W.J./Bill) Thompson was born on March 26, 1849 in Aurora Township, Preston County, Virginia (1863-West Virginia). The 8th child of 9 children of Wm. & Mary Anne (Wotring) Thompson. His father was a shoemaker at the Wotring Tannery and died in 1853. Mrs. Thompson left Preston County in September 1859 with her children on a covered wagon for Oregon. They arrived at St. Charles, Iowa around Christmas, settling at New Virginia, joining other relatives.

Wm. may have been taken captive by Native Americans prior to entering Colorado Territory. Via ox cart he came to Central City to start mining in 1865. He ventured into adjacent Middle Park, seeking gold in the Troublesome Valley, supplied with 1 ton of flour. He spent four years as a postal carrier from Hot Sulphur Springs to Steamboat Springs, using the Gore Pass route.

Once, the Ute Indians saw him baking biscuits and they enjoyed the “beescuts” until the flour ran out. An altercation left Wm. severely beaten. He made his way to Georgetown and the miners denied him entry, thinking he was a crazy man. One kind miner gave Wm. canvas for clothing, and took him to Idaho Springs. He recovered and was employed as a shoemaker.

Wm. re-entered Middle Park, built a hunting cabin on Muddy Creek ready for the 1867 winter. Chief Yarmonite led 40 Ute men, women and children to Wm’s cabin explaining to him that the Gore Range was covered with snow, and they were in need of food. This time Wm. refused. A rifle match was agreed upon with the loser put to death. Wm. threw his sombrero to the ground as his hair fell to his shoulders. A cry of the Ute went up as they recognized Wm. from the Troublesome. Sub-chief Piah told Wm. they could not fight a Ute brother, and braided Wm’s hair and applied face paint as they were at war with the Arapahoes. A hunt for bison began. Shooting was heard with the thought the Arapahoes arrived. Len Pollard & Sandy Mellon were chasing buffalo, which Wm. shot and killed. Len & Sandy confronted the supposed Ute with Len asking, “Where did you get Bill Thompson’s Winchester rifle?” Wm. played along until Sandy aimed his rifle on Wm. who wisely said, “Don’t over reach yourself, Sandy.” Sandy demanded, “Who in the hell are you!” Bill laughed and told them he was Bill Thompson. The sobriquet of “Ute Bill” was given. Wm. preferred his nick name over his legal name.

Ute Bill carried on as a mountaineer. Hunting and trapping, taking wild game to the Georgetown & Denver markets selling the meat, until laws prohibited the practice. A new career began of driving stagecoaches and freight wagons for the Colorado Stage Company on the Georgetown, Empire & Middle Park Wagon Road, over Berthoud Pass to Grand Lake, Hot Sulphur Springs, Gore Pass, and occasionally Steamboat Springs. One day on Cottonwood Pass, Ute Bill stopped and hiked over a ridge to find 400 Ute tipis on a meadow, imaging this could be a ranch. He homesteaded acreage, bought the home ranch from Al Honscome, and through marriage owned 4000 acres.

The T Lazy S brand was patented. The Thompson Ranch was the 1st in Middle Park allowed to receive water from the Grand (Colorado) River for irrigation. Ute Bill Creek and Ute Bill Ditch 1 & 2 were also patented. Middle Park became Grand County of February 2, 1874. Ute Bill was on the first jury, appointed Road Supervisor, and a delegate to the state Democrat Party Convention. In 1879 he owned Thompson’s Billiard Hall, bought a store from John Kinsey and expanded it into Ute Bill’s Saloon in Hot Sulphur Springs. He also had a game park of tame antelope, deer, and elk.

The “Texas Charley” incident of December 5, 1884 began at the saloon when Texas Charley forced Ute Bill to hand over his prized Winchester rifle. His future father in law played a role in the coroner’s inquest. January 30, 1889 The Middle Park Times listed the sale of the saloon to Billy Pharo with the quote of, “We don’t reach Denver yet but were getting there you see.” An ad in Hot Sulphur Springs complemented the sale.

On December 25, 1893 Ute Bill Tompson was united in marriage to Mabel Smith. The first recorded marriage in the Hot Sulphur Springs Congregational Community Church. Mabel was the eldest daughter of Preston Henry & the late Mary Smith. Ute Bill & Mabel had 6 children Fred Charles, William Preston, John Henry, Otto Woodring, Marion Loman, and Mary Ellen. W.J. Thompson advertised in the Grand County News, January 8, 1904 Sulphur Springs and Kremmling Stage Carries Mail & Express Stage Fare, One Way $1.50 Round Trip, $2.75 In 1903-1904 The Denver, Northwestern & Pacific Railroad (D.N.P.R.R.) was buying ranchers land. Ute Bill refused to sell his for $500 and lost on appeal in District Court receiving $300. However, it was “matter of principal” that he won on, as E.A. Meredith the railroad surveyor diverted the rail bed to be placed on the other side of the Colorado River below the cliffs.

As the excursion trains were passing by the Thompson Ranch on their way to the Railroad Days celebration in Hot Sulphur Springs on September 15, 1905 Ute Bill danced with joy knowing that the “Iron Horse” was NOT allowed to disturb the sacred tipi grounds of the Utes! Ute Bill forgot his grievances and presided over a vast fish fry and barbeque of elk on July 4, 1906. The last cattle trail drive out of Grand County was conducted by 2 aged pioneers, Sam Martin of Muddy Creek, and Ute Bill in 1923. Another matter of principal to avoid paying railroad costs, but of great sentimental value of all the past cattle trail drives. Ute Bill & Mabel both entered St. Luke’s Hospital in Denver for surgery in late February 1926. Ute Bill’s first surgery went well, the second did not. Mabel was not able to be with him as she was recovering from her own.

Many Middle Park pioneers visited them to wish them well. Old friend Charles Nines Sr. who retired in Denver from Pine Ridge Agency, South Dakota a Sioux language interpreter and Trading Post owner was with Ute Bill when he passed away on March 19, 1926, one week shy of his 77th birthday. William Jefferson “Ute Bill” Thompson is buried in the Hot Sulphur Springs Cemetery off of Cottonwood Pass, Looking at Elk Mountain and the original homestead.