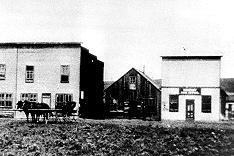 Granby was settled in 1904 and incorporated the next year. The town was created along the railroad line being built by Denver, Northwestern & Pacific, and was a connection with the stage route to Grand Lake. The Granby site was also chosen because of the dry ground and and good view of the surrounding mountains.

The town was named in appreciation of the services of Denver attorney Granby Hillyer, who worked to lay out the town site. Its central location makes it a natural trade center for east Grand County. Specialty truck farming, principally lettuce, became a major crop for Granby. At the peak of the market, the Waldorf Astoria hotel in New York City proudly advertised Granby Head Lettuce on its menus. Later, after WW II, Granby was called the “Dude Ranch Capital of the World.” Today the town offers a mix of recreational amenities and residential charm.