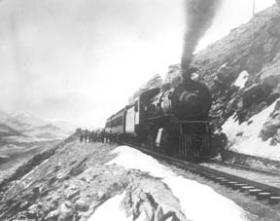 Construction on the railroad line from Denver to Grand County began in July 1902.

The project, called the Moffat road (officially the Denver, Northwestern & Pacific), was the seemingly impossible dream of David H. Moffat, who spent much of his personal fortune building the tracks over the Continental Divide.

The rails pushed higher and higher up the mountains until they reached a station named Corona, meaning the crown of the continent.

Corona was the highest point in the world with a standard gauge railroad and the journey from Denver in the winter was perilous at best.

Huge snowplows were required on either side of the Divide to keep the tracks clear.

Eventually, in the late 1920s, a tunnel was dug through the range, eliminating 22.84 miles of track and the breathtaking journey over Rollins Pass.

The railroad reached Granby and Hot Sulphur Springs in 1905 and Kremmling in 1906, and played a significant role in building the population of Grand County.