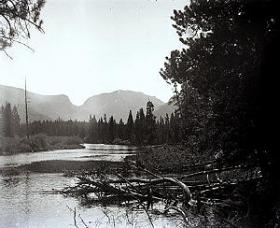 Grand Lake was established in 1879 and incorporated in 1944. It is named for the largest natural body of water in Colorado. In 1867, when only a few people resided near the lake, Major John Wesley Powell (the man whose group first rafted the Grand Canyon) came to explore the possibility of floating down the Grand (now Colorado) River. That summer, Powell, local resident Jack Sumner, and William Byers, founder of the Rocky Mountain News, made the first recorded ascent of Longs Peak from Grand Lake. In the early 1900’s a Yacht Club was formed by enthusiasts who were attracted by the demands of attentive seamanship the lake demanded.

In 1912, Sir Thomas Lipton contributed an impressive cup to be presented annually to the winner of the annual August Regatta. This event still draws skilled sailors to the challenging competition. The town was founded during a very brief mining boom, but because of it's natural beauty, tourism has long been the sustaining feature of it's economy.