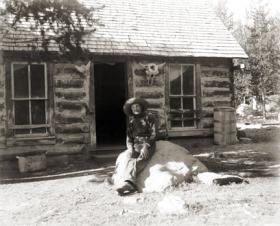 Many noted fur trappers and traders are reported to have been familiar with the headwaters of the Grand (Colorado) River as early as the 1820s. Among them were Thomas Fitzpatrick, Jim Beckwurth, Christopher “Kit “Carson, Henry Fraeb and Peter Sarpy. Louis Vasquez built a trading fort on the South Platte River and ventured into what is now Grand County, where a pass east of Berthoud Pass is named for him.

His partner, Andrew Sublette, also came across the Divide to trade in Grand County, as well as Ceran St. Vrain, whose fort was near modern Platteville. 26 year old Tom Smith was with a group of trappers who entered the northern part of Grand County in 1827, where they were attacked by either Ute or Arapahoe Indians. Tom was hit in the leg by an arrow, splitting the bone and creating a life threatening infection. Amputation was needed but none of the party had the nerve to perform the operation. So Tom took a butcher knife and amputated his own leg. As “Pegleg Smith” Tom later became noted as one of the greatest horse thieves in the West, but was never prosecuted.

The beaver trade was essentially over by the 1840s as silk replaced beaver pelt as the stylish material for top hats. In 1842, famed traveler Rufus Sage came over Muddy Pass into Middle Park, but recorded almost no hunting activity there. On the other hand …fishing was great! His party caught over 50 pounds of trout in one morning. Noted mountain man Jim Bridger and another guide, Joseph Chatillon, let the infamous Sir George Gore on an extravagant hunting expedition in Middle Park. Despite the senseless slaughter of thousands of game animals, Gore has been immortalized with a mountain range, canyon and pass named for him.

One of the earliest of the mountain men to discover what was to become Grand County arrived in the Fraser Valley as early as 1860, soon after gold was discovered in Colorado. Charley Utter, known as “Colorado Charley”, was considered the prototype of rough trappers and traders. He was unique, though, in that he insisted on taking a bath every day, whether in the hot springs or beneath frigid waterfalls. In 1864, Charley was one of the first to make use of Berthoud Pass driving cattle that he raised at Troublesome Creek. His home was host to various adventurers who came to explore the prospects of Middle Park. He would eventually work with the famous Buffalo Bill Cody, appearing in “Wild West” shows.

When Kentuckian Beverly D. William spent some time in Grand County, he realized the Grand River was originally named the Colorado. As a Washington delegate from the newly organized “Jefferson Territory” (as this area was known at the time), he was instrumental in getting the named changed to the “Colorado Territory”, although the river was called Grand River until 1921.