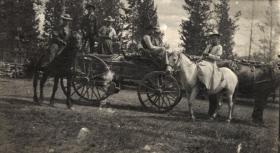 George Henry Church and his brother John had a substantial ranch in Jefferson Country, prior to Colorado Statehood.  When the Timber and Stone Act of 1878 was passed, it permitted the purchase of land unfit for agriculture for $2.50 an acre.  Thus the Church brothers obtained land in Middle Park for summer grazing.  They would move their cattle into the Park by driving them over the Rollins Pass.   The area they used is just west of the town of Fraser and became known as Church Park.

In 1910, the Church Ditch was created to divert water across the Continental Divide for irrigation.  The remains of this early trans-mountain project can still be seen today at mile marker 241.5 on U.S. Highway 40.