A Dream Smashed in Gore Canyon 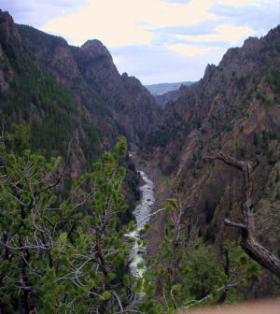 The idea of a water passage from the Atlantic to the Pacific Ocean had long captivated the imagination of early explorers.  Soon after the Territory of Colorado was established, the United States government made a standing offer of $3,750 to anyone who could demonstrate such a route.

In 1869 a dreamer named Sam Adams convinced some people in the town of Breckenridge that goods could be sent upriver via the Mississippi, Missouri, Platte and South Platte Rivers to South Park.  Then, with a short portage over Boreas pass, they could continue down the Blue River to the Grand (Colorado) River and then through Gore Canyon the Sea of Cortez.

Volunteers were told they would share in the prize, and they built four boats of green lumber for the voyage.  The flotilla was launched with great celebration, the lead boat bearing a banner proclaiming "Western Colorado to California ? Greetings!"  A little dog was given to the crew to keep up morale.

As the boats went down the Blue River, the waters were a bit rougher than expected. When the men arrived at the Grand (Colorado) River, the crew set up camp. However several of the "sailors" declared they had had enough and began a trek, via dry land back home to Breckenridge.

When the boats reached Gore Canyon, they encountered violent upsurges and dramatic drops.  The wild waters smashed all four of the vessels on dangerous rocks.  Fortunately, all members made it to dry land, even the little dog.  No reward was ever given for the attempt.