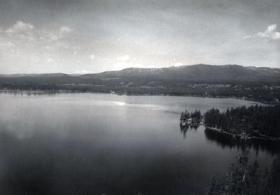 The prosperous John Lapsley (Laps) Ish family are an example of very successful settlers and entrepreneurs in early Grand County. The Ish family, with eleven children, came by covered wagon to Colorado from Missouri 1863 and settled on a farm outside of Denver.

18-year-old Laps Ish came to Grand County in 1881 to attempt his luck at the short lived mining boom outside of Teller, north of Grand Lake.  He tried his luck at mining for 4 years and also carried the mail between Teller and Grand Lake, on skis or snowshoes in the winter and by foot in the summer.

Laps Ish married Alice Shearer and homesteaded near Rand (in present day Jackson County). They had two sons, Lesley John Ish and Guy Lapsley Ish. Laps and Alice built the Rand Hotel and operated it until 1910.  The family then moved to Granby and built the Middle Park Auto Company garage and ran a stage line to Grand Lake. They built the Rapids Lodge by operating a sawmill on the Tonahutu River in Grand Lake and opened for business in 1915  They also built the Pine Cone Inn in Grand Lake and Leslie managed it for many years. Laps Ish died in 1943.