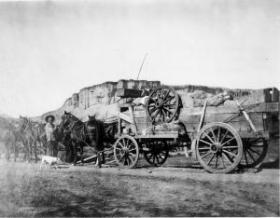 It has been said that if you walk down the streets of Hot Sulphur Springs and call out "Hello McQueary" at any given time, someone will respond.  Certainly one of the most prolific families to pioneer the Middle Park, the McQueary clan consisted of Scotch-Irish descendents of the immigrants who had settled in the mountainous regions of the Ozarks and the Blue Ridge Mountains.

Henry McQueary and his brother Humphrey, visited the Middle Park area in 1866 while prospecting for gold on Troublesome Creek.  Henry built a cabin on the creek in 1875 and other relatives came to settle including Walker, James, John and George, along with their families.  The families settled near Hot Sulphur Springs and as far west as Muddy Creek and the Gore Canyon.

In 1875, Henry found a Ute Indian with a broken leg near the Troublesome Creek.  He took the man to his cabin and splinted the leg.  After three weeks, the injury healed enough that the Ute could return to his family and that created a friendship that outlasted the Ute uprisings of 1878-1879.

In 1888, Fount McQuearly established a hotel in Hot Sulphur Springs which included a 45 foot ballroom in the Antlers Saloon.  In his later life, he served as County Commissioner (1924).  Many other McQuearys also went into politics, so much so that they were sometimes referred to as the "McQueary Gang".

"Uncle Walk" McQueary once said that if Andy Eairheart "ever fell into the river and drowned, we'd have to look for his body upstream 'cause he's too stubborn to float downstream!".

Dick McQueary was quite enterprising, establishing a store in Hot Sulphur Springs (1904) and helping newcomers to the area locate homestead sites.  He once was paid with a barrel of china for his services.  Dick also was a contractor for building and maintenance for Grand County and he led the effort to build a road through Rocky Mountain National Park.  This road was eventually finished in 1920 and is known as the Fall River Road.

Eventually the McQuearys had over a dozen ranches in Middle Park.

The Folks on the Troublesome, Grand County Historical Association journal, Vol XII, No. 1
Up and Down the Valleys of the Muddy, Grand County Historical Association journal, Vol XI, No 1
Mary Lyons Cairns, Grand Lake in the Olden Days, self published, 1975
R.C. Black, Island In the Rockies, Pruett Publishing, 1977
Nell Pauly, The Day Before Yesterday, 1972