Wheatley Family of the Troublesome 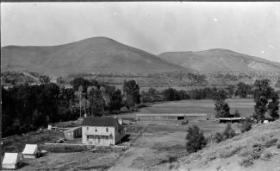 Forrest Wheatley was born in Chicago in 1875 and his brother George R. was born 6 years later.  Their parents were English immigrants, William and Mary.  The family moved to Denver in 1887 where William pursued his trade of upholstering carriages.

After Forrest returned from service in the Spanish American War in 1900, he and George decided to establish homesteads of 160 acres each on the East Fork of Troublesome Creek. When the expansion of the National Forest land limited the growth of their holdings, they moved to Muddy Creek to the west and ran their operation there until 1929.  They continued to purchase additional homesteads on the Troublesome.

The brothers had a disagreement so Forrest and his wife Ida remained on the Muddy while George moved back to the Troublesome.  He sold the original claims high on the East Fork.  Later he married his neighbor, Bessie Sampson, and they moved back to the Muddy Creek basin and had five children; George, Douglass, Kenneth, Maidie and Gene.  Gene drowned in an irrigation ditch while still a young child.

Through purchases and marriages, the Wheatley descendents eventually owned property throughout western Grand County and as far north as the Yampa River Valley.

The Folks on the Troublesome, Grand County Historical Association journal Vol X11, No. 1