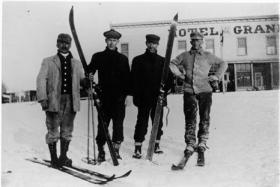 Carl Howelsen, a ski jumping champion in his native Norway, came to Denver to pursue a career as a stonemason in the early years of the 20th Century.  He amused himself and others by demonstrating ski-jumping in the foothills of Denver.

In 1911, Howelson went to Hot Sulphur Springs, where he taught locals such as Horace Button the art of jumping.  Under Howelson's leadership, the first winter carnival west of the Mississippi Rover was held there on February 10-12.  According to the Middle Park Times, "Never before in the history of the Territory and State of Colorado has such an event even been contemplated, much less held!".