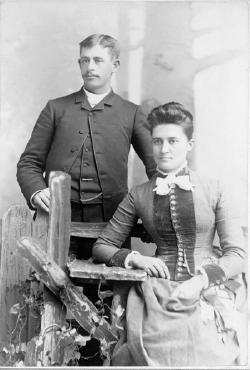 One of the oldest brands in Colorado still in use by the same family is the Bar Double S brand of the Sheriff Ranch near Hot Sulphur Springs. The current owners of the ranch are John Brice and Ida Sheriff. In 1863, Matthew Sheriff of Keithsburg, Illinois came to Colorado to search for gold in the California Gulch, near where Leadville would be established. Mathew was dismayed by the gray mineral which consistently clogged the gold sluice, and gave up on his dreams of instant wealth to return to Illinois.

Many other miners also gave up mining for this reason, never realizing that the gray mineral was carbonite of lead, which was rich in silver. Mathew died in 1863 at the age of 40, leaving behind his wife Marietta and their 3 surviving sons, Burt, Glenn and Mark. In 1878, Marietta was inspired to return to Colorado in search of security and stability for her family. She spent some time in Leadville running a boarding house. Her sister was the wife of William Byers who was developing the Hot Sulphur Springs area so Marietta moved to the area to settle with her sons. In 1882 the family homesteaded three ranches of 160 acres each, proving them up and added a preemption right to another 160 acres.

Bert later moved to Denver and established a livery stable and Mark and his mother moved into Hot Sulphur Springs, while Glenn continued to work the ranch. Glenn married Alice Cleora Smith in 1886 and they had two surviving sons, Brice and Glenn Jr. Glenn Jr. was only 6 weeks old when his father died at the age of 33 of “brain fever” or diphtheria. Alice took the children back to her family in Iowa to raise them, but the boys returned to their Colorado ranch in 1910. Brice, who suffered from a back injury as a child, bought an abstract business in Hot Sulphur Springs and lived there with his mother for the rest of their lives.

Glenn Jr. continued to expand and develop the ranch and married Adaline Morgan in 1923. They had four children; Nona, John, Robert and Catherine. Glenn Jr. served Grand County as a Commissioner for 24 years and also as the County Assessor for 4 years. Glenn Jr.s, son John, took over the ranch and married Ida Marte in 1949. Ida’s family had homesteaded their own ranch near Cottonwood Pass. They have two children and continue to work the ranch to this day.

Interview with John and Ida Sheriff, at the Sheriff Ranch, July 14, 2004